Quite often I have colleagues who confuse gamification and game-based learning. Webpages like https://blog.capterra.com/gamification-vs-games-based-learning/ and https://ashleytan.wordpress.com/2017/08/07/gamification-game-based-learning-serious-gaming/ try to explain it. But if these still leave you scratching your head, today I learnt a simple way of distinguishing it from a colleague, Mr Chia Hai Siang, who has expertise in gamification and games in learning. Simply put, if you can switch the content and still retain the game mechanics, then it is gamification.

For example, most escape room learning activities are gamifying learning. Switch the content of the puzzles from Maths to English and the game mechanics are the same. You solve the puzzles to get a clue to the next puzzle to eventually escape the room. Game based learning would be for example a player/learner having to apply physics to crank open a door jammed in a deliberate way. The physics content is baked into the mechanics of the game.

This simple distinction has been a eureka moment for me and I hope it helps you too!

Just had a great talk with a fellow educator, David Oon, who’s the ICT HOD at Spectra Secondary School. He has been doing gamification with a knowledge web/map system for a number of years and it has worked well for the lower secondary levels. He even budgeted for various physical items which students can redeem with the experience points they earned. This is especially ideal for the socioeconomic group he’s working with, since the items are of high practical value for schooling and other aspects of daily life.

But over the years David realised that the upper secondary students are not so engaged by the gamification anymore. They tend to question the relevance of what they’re doing. This prompted my colleague to reach out to various educators, including myself, who have had experience with gamification to see what design additions can be done to resolve this issue. Unfortunately none of us have actually reached the stage he’s in. Most of us gamified at a topic level. He has gamified at a syllabus level! What a grand achievement! Edit: David has insisted that he is simply carrying on the good work that his predecessor, Wei Ren, started. You can find out a bit more about how Spectra Sec uses gamification and knowledge maps in this link. David’s not resting on his laurels, he still wants to level up.

And the next step in his leveling up is to bring a narrative flow to his gamification. He already has a narrative in mind. So the next thing is about how to implement/manifest this narrative. We recalled how the Marvel Cinematic Universe did it – by using post credit clips to link one movie to another. The advantage of this over the traditional method of a cliffhanger is that there is closure. The movie has already completed its small arch, the audience is satisfied with the closure and the post credits just tease a little bit more. For example Thor’s hammer was shown on earth in the post credits of Iron Man 2. It had totally nothing to do with the plot of the Iron Man 2 movie itself, but it piqued our interest. And when the Thor movie was shown, many of the audience quickly connected the plot back to the Iron Man 2 post credit scene of Thor’s hammer on earth, helping to connect Iron Man 2 with Thor, despite not much of a plot continuation or overlap. In later use of the post credit scenes for Marvel Movies, sometimes there are clear plot overlaps, but the fact that it’s not a necessary condition makes post credit scenes the underrated hero of the Marvel Cinematic universe.

To borrow this analogy for a narrative flow, perhaps it’s better for a topic, or as David calls it, a learning zone, to have a self contained capstone/boss-fight for closure, before having a transition activity or cinematic to connect to the next topic/learning zone. It sounds simple enough but sometimes we connect everything together thinking it’ll be better. Imagine if the ending of Iron Man 2 directly linked to Thor’s plot in-movie instead of via a post credit scene, the feeling will be very different. This was kind of what DC tried to do by foreshadowing future movies in Batman vs Superman with the Flash’s time travel scene in-movie to warn Bruce Wayne about Superman. We all know how well that turned out.

So tentatively, we arrived at the conclusion that self-contained learning zones with capstone projects/assessments, linked via videos or activities to other learning zones is the way to achieve a narrative flow. This understanding will probably evolve the more we explore and brainstorm with various educators. I’m excited to see where this will lead us!

It’s really a joy to see an initial design bear fruit. One of our big pain-points when designing feedback app MineGap was not knowing what happens when teachers complete marking a piece of work and it is returned to students. So we built in a reflection component as a final step before closing the feedback loop as can be seen below. And I am glad that students take the opportunity to clarify their doubts.

This makes me lament however, at the inefficacy of the old/traditional way. How many of these doubts were unaddressed simply because we didn’t design adequate stop-points for students to ask and digest what they have learnt? We simply plowed on with our content syllabus with an assumption that just because we said/taught it,  students have learnt it. This contravenes our own learning experience and all forms of evidence-based knowledge about learning. If we can put feedback and feedforward at the heart of learning, wouldn’t the students’ learning experience improve? And with a better learning experience, wouldn’t their academic results be positively correlated as well?

It was such a blast presenting at FlipTech East Coast 2018 ! You can see some of my photos here. From the follow-up conversations with various participants, I guess gamification can be categorised into the following:

If there has already been a more formal and better categorization than my above ones, do let me know in the comments! This was written under jet lagged and FTEC18 withdrawal conditions after all! Haha!

The 2018 International Conference for Teaching and Learning with Technology has come and gone. And as usual it was a blast! I was fortunate enough to enrol into Prof Manu Kapur’s (of Productive Failure fame) masterclass on exploratory problem solving. The workshop was very well designed with a good mix of peer and teacher led discussion.

What is and what isn’t? 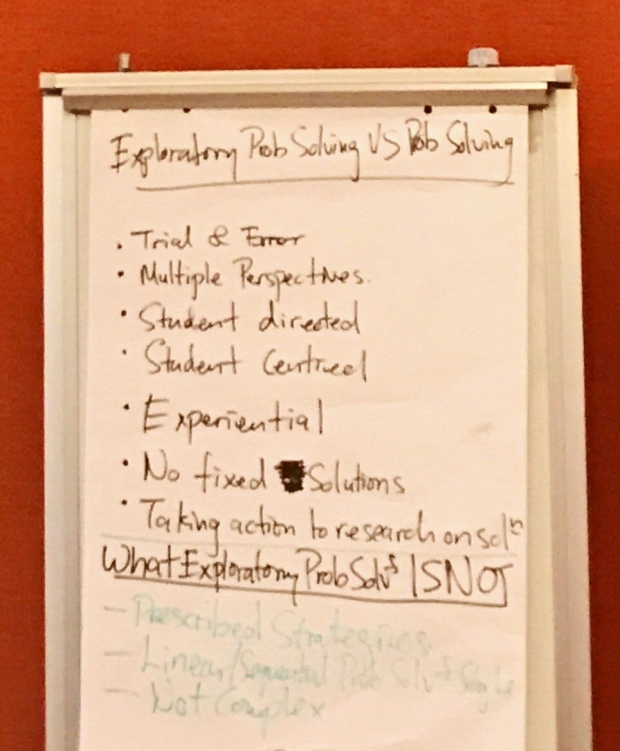 The following design principles were later touched on via discussion activities.

Each of these principles were well explained and I definitely gained a lot from them. To prevent this post from becoming overly long, I’ll just mention a few things which really stood out in my own learning.

This was the first workshop about learning which talks explicitly about developing intuition! As seen in my OneNote screenshot below, comparing and contrasting scenarios with slight changes allows students to both activate and develop their intuition. I think this activity also helps the “seeing/noticing” aspect as well.

Another eureka moment was about using games in learning. I have been an advocate of using games like the pit trading game for learning because I can see the “ah ha” moments when students are playing the games. However I did not observe clear evidence (e.g. via grades, clear change of mental models, higher order discussion etc.) of learning that stuck.

In a side convo during the break, reinforced later on in his workshop, Prof Manu talked about using games for “grounding” (giving concepts a firm practical basis) instead of the actual formal learning. This makes sense because formal learning often has to end up in some kind of written assessment. Games do not accomplish that particularly well. But well designed games can indeed provide simulations which allows students to experience concepts first from a practical level. After which direct instruction of the abstract concepts can come in to formalise the learning experience. That was a pretty cool eureka moment!

I had a great learning experience and will definitely try to incorporate concepts from this workshop into my class learning design. To end this blog post, I leave you with a great quote by Prof Manu celebrating the suboptimal path 🙂

Sometimes we need to take a step back and appreciate/marvel at what modernity has enabled us to do.

I’m at my school’s canteen doing formal work with no need to be in the office at all! With WiFi, I have access to all cloud-based documents and email. With my phone I can communicate with anyone instantaneously and take photos (like the one below). But of course don’t forget that there’s still the productive joy of pen and paper. 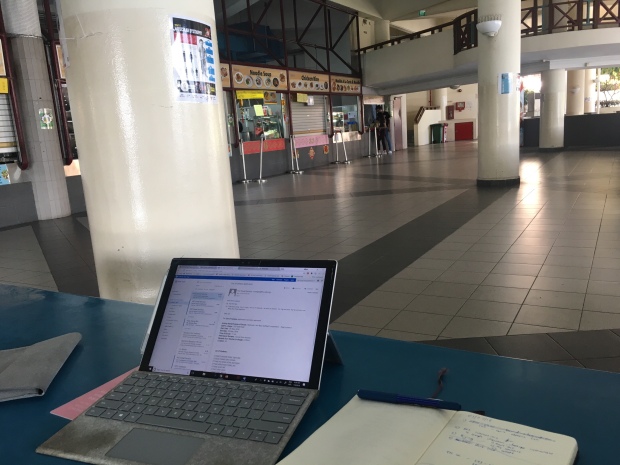 It’s been quite interesting to see the Blended Learning Networked Learning Community take to using the intrinsic motivation inventory so readily. I was kind of just resigning myself to the idea that most school research will be confined to simple survey questions for expediency. But I am glad my colleagues in this community recognise the value of using a robust instrument that has been widely accepted in pysch. research. It need not be this instrument, just something more robust than the usual and I’ll be a happy camper =).

As with much of social science research, this relies on self-reporting of human participants, which has its issues. But this inventory has questions built-in to minimize validity concerns. So while imperfect, this is still much better than the usual surveys we use. One disadvantage however is that it’s a rather lengthy survey, which may reduce participation of students who are kind of suffering from survey fatigue ( we survey them for most things these days).

My Tweets
edutechie
Blog at WordPress.com.